Side note: All right, I promised my friend and stalwart reader Jay that I’d would do some Arthurian legend. I will. I’m working towards it. It’s just that, in deciding to do this, I realized how many mythologies I need to give some kind of background on because they tie directly to Arthur in some way. So, bear with me. We’ve still got some mileage to put on our coconut shells.

Zeus, as everyone knows, sleeps around. Shamelessly. Incest is no barrier to this. He would have been perfect to appear on Jerry Springer or some other daytime talk-show. Moreover, he was completely unrepentant in how he had these affairs, often assaulting women to get what he wanted. That’s just who he was.

Ann was sweating as Lita helped her out of her suit. Her hands shook with the endorphins and adrenaline coursing through her. But more than all of that, she felt completely overwhelmed by the surfing. She wanted to think about it, but at the same time, didn’t.

M³ The Triumph of Monotheism

By the time the Arabian Nights are being penned, Rome has already converted to Christianity (and fallen). Christianity spread throughout the rest of Europe and Russia. Only a little behind, Islam had spread throughout northern Africa and western Asia. Aside from India and China, most of what we refer to as the civilized Ancient world had abandoned polytheism in favor of monotheism.

Alex took a moment to survey the lecture hall, which buzzed with conversation, as always happened before a class began. The seating had shifted dramatically, though, with a large number of students crowding the front rows. Alex recognized many of those faces as ones that had asked questions and followed her to the coffee shop in the student union.
Good. Those are my most engaged students. The rest look interested, too.
Of course, she had the usual rows of slackers in the very back, most of whom had eyes focused on phones, tablets, or laptops.
“Well,” she began pleasantly, “hopefully now that we’ve got the Civil War out of our way, we can dive into a lecture I had actually planned out.”

M³ Our Hero Is Better than Your Hero

We know that Odysseus is a strong leader, a great warrior, and very clever, which are all very admirable traits, especially in Greek culture. However, he’s also arrogant, destructive, intolerant, and did I mention arrogant?
These traits make it difficult for him to be a hero to Muslim Arabs at the time when Sinbad’s story started circulating. These traits are simply incompatible with the values of the culture. Couple this with the fact that Odysseus is Greek (aka a foreigner) and it’s clear that he’s got to go and make way for Sinbad.

Ann went loose, letting her body twist in the wind. All she did was keep her hands tight on the rail. What was once a tempest, throwing her about became something else, something wild, but with a guiding force to it. She knew—but didn’t know how she knew—where the wind would go, and moved her body and the sail before the wind did. The sail's telltale sensors still screamed at her as they only went blue for an instant.

Islands in a Sea of Fog

Anyone who has driven in West Texas knows that the landscape is nothing to write home about (and yet I’m doing it, anyway). It’s bleak desert occasionally broken up by flat-topped mesas, many of which have become the home of windmills.
Most of the time, that is. Dawn, just east of Fort Stockton, Texas. The sun is a golden hemisphere struggling to break free of the horizon, promising a summer heat responsible for hammering the desert into anvil-topped mesas. But the air is not dry on this morning. Recent monsoons soaked the air, and a low fog clings to the ground. This is not the fog of San Francisco or of “pea soup” fame. It’s a veil that barely conceals, and as one gets closer, much like Salome’s enticing dance, the veils are stripped away.
Yet the beauty in this fog is not in piercing through the veil, but in looking out across the valley, where those flat-topped mesas rise out of the fog like island oases, and fog laps at their sides, trying to swallow them. But they are too tall.


I’m taking in all I can; the camera on my phone doing poor justice to the view as my car surges down the interstate. In a few minutes, I’ll be swallowed inside the nebula and see the fog as just a slight haze barely worth noticing. And after that, the sun will climb high enough to boil the sea away as if it never was. But the mesas remember, and the windmills remember, and I remember. 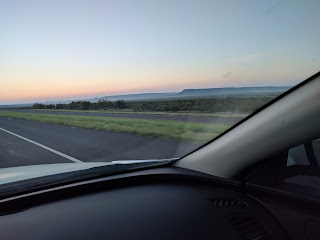 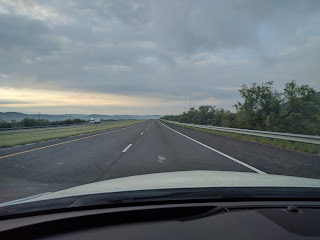 M³ A Hero of Their Own

So, Sinbad’s 3rd is a reimagining of book 9 of The Odyssey, but the question remains, why? Why not just rewrite Odysseus as the hero they need him to be? The first part of the answer is easy. They wanted their own hero, someone from their part of the world. Greek heroes are fine and good, but they only speak to Greek culture. Sinbad is a hero of the Arab world, representing that culture. It’s only natural that they would want to tell stories of their heroes instead of relating what the Greeks did.
This is not a new idea, either. The Romans readily assimilated Greek mythology with their conquest, making Heracles into Hercules and Odysseus into Ulysses, but they also had their own hero Aeneas who also copied and piggy-backed off of The Odyssey (at some point I may even go through the Aeneid).
Part of the reason for Sinbad is to give the Arab world their own cultural hero in the same vein of Odysseus. Many cultures feature some type of wandering heroes. Sinbad’s 3rd Voyage copies more closely than others, but it’s still valid to establish Sinbad as the hero of his culture.
The culture also dictated why it couldn’t be Odysseus, but more on that later.

The board bucked underneath Ann’s feet, while the sail jerked, almost beyond her control. The idea that she, using simple human strength, could control a sail caught up in a dark energy wind that propelled a ship at 1.1 light years per hour was ludicrous. It was beyond insanity. None of the math would ever work out, but then she hadn’t tried.
At first Ann fought for control, but the futility quickly became apparent. She and the board tumbled in front of Calypso, though the ship was gradually gaining on them. Flynn kept the sails trimmed so there was no spill, while Ann was tossed like a leaf in a tempest.
Procedures for how to trim sails flew through her head. The readouts on her HUD flashed information from the board’s telltales. Numbers and alerts cascaded, flashing from blue to white to yellow to red before going back along the spectrum.
“Ann,” Lita’s voice sounded in her helmet, “your pulse and blood pressure are jumping. Blood oxygen saturation is dropping. You’re coming close to hyperventilating.”
The sail jerked again, her left hand slipping free.
Flare it!
She couldn’t see her hand, nor could she see the rail on the sail. All she had as a reference was where her body knew her other hand was. She flailed blindly, a sense of panic rising up as her right hand ached from its death grip on the rail. Several times her hand glanced off, but she was never able to grab it.
“Ann, your vitals are spiking again.” Lita’s voice took on worry.
Flaring thing!
“Ann!” Panic welled in that voice.
“Flynn!” Lita was now on the ship-wide comms. “Ann is not responding. You have to bring her in.”
Flynn’s voice cut in. “Stay calm, Doctor. Ann, we’ve got telemetry and know your comms are active. Call it.”
She said nothing as she continued to flail. Fingertips hit something, and she grabbed reflexively.
“XO,” Lita came over again. “You have to reel her in. She’ll go into a panic attack soon.”
“Got it!” Ann yelled.
Despite the assurance, the sail kept fighting her, and she was amazed her feet hadn’t torn free from the board. Dully, she could feel her whole-body ache from every muscle exerting to try and control the board.
Just . . . stop! Stop fighting it. Stop thinking. The wind can’t be thought out. Stop being. Feel the wind. Surrender control to the wind’s mercy.