Ah, Macros, one of my favorite little tricks to use in word processing and in Excel. Macros are little bits of computer code in an office program that do something. They're usually used to automate some kind of process that is usually repetitive such as preparing a document in manuscript format or
Read more »
Labels: Writing Tools

I had moved to Frisco to start over, to leave the crimes of my past behind me. The only problem was I didn't have much idea what to do. I was just plain good at what I had been doing, and it was hard to find something else. My money had been easy back home, and working the docks in Frisco was back-breaking work. Honest, sure, but not a day went by that I didn't collapse in the shabby bed I rented.

I'm a nerd, and proud of it. Yep, I said it. I've been tinkering and toiling away since high school with my 286 with its whopping 256kb ram and a 40mb hard drive. I had a vga monitor (there is a large difference between the vga of then and the super vga often delineated as simply vga today). I even added in a sound card, and managed to get it to work by finagling the IRQs. I started out with DOS 5, in the era before Windows.
Back in the day the word processor wars waged a bitter battle. I won't discuss the outcome of the war, as it's largely immaterial. Today I want to talk about a new, emerging trend of softwares: the stripped down novelty text editor.
It seems hardly a week goes by where some new plain text editor is hawked as the thing in writing, now. The idea behind them is to distill the writing environment down to its most fundamental: a screen, and a cursor. By ridding the real estate of everything else, it's believed to eliminate distractions. I can't say I've ever been distracted by the various menus and toolbar buttons of my word processor, so I don't get the appeal.
Others add in gimmicks to ease the burden of writing such as a concept that if the writer doesn't keep writing, the word processor will slowly begin to sound an annoying tone or even erase what was written. Another seeks to transform writing into a zen-like experience with pleasant sounds, soft backgrounds, and customizable clacking sounds of the keyboard. Some take the other route, and while providing a simple editor, offer extensive organizational tools that cross link, allow for pictures, sound files, notecards, and the like.
I've played around with them, and can't say that I prefer any of them over my word processor, and I've got reasons for them.
1. Text editors, while some of them support file formats other than plain text, do not allow for formatting inputs. If I need to add in italics, underlines or any other non-standard formatting, the text editors can't handle it. Yes, I could come back later and put them in, but what's the point? It makes more sense to add it right away instead of making a notation to do it later. Text editors also cannot handle headers, page numbers, indentations, or page breaks. The WYSIWYG interface of a word processor is also very nice to have.
2. Automatic backup and save options are limited. With my word processor I can tell it where I want to save backups, and how often, minimizing the chance of something going wrong.
3. A word processor is highly customizable. If you really want a stripped down appearance, you can do it! Take down all the toolbars, rulers, buttons, and what have you for a clean, no frills appearance. My beloved WordPerfect even allows for a fully retro appearance with a blue screen and a cursor (ahhh, memories).
4. Writers are required to know how to perform some more advanced functions on word processors. Aside from knowing how to properly format a manuscript (and that means not inserting headers and page numbers manually or hitting enter several times to get to a new page. More on manuscript formatting here) there are the tools of editing, such as Track Changes, which Rachelle Gardner posted about some time back found here.
5. Distractions come in many shapes and sizes. I don't believe that a plain text editor really is a solution. The various menus of word processors really aren't the distraction. Internet, TV, other people, and cats are distractions (even now my cat has decided that my keyboard is an excellent place for her tail to rest). And, let's face it, distractions happen no matter where you're at or what program you're running.
I think it's far less complicated to eliminate extra software. The time it takes to learn these new text editors (despite having minimal features) could be better spent writing, or even getting to know your word processor under the hood. Make it fit your needs instead of going for gimmicks.
Labels: Writing Tools

<< Go back to Part IV   [Stories Home]
Showdown at Club 42
V Propositions
I noticed the card when I pulled out the keys to my car. It was the same business card I had slipped to Laura in the pack of cigarettes. It had a slight smell of tobacco on it, but also bore "Liberty and 8th the alley, 3am" in a fluid, feminine hand. Which is why I
Read more »
Labels: short story

<< Go back to Part III   [Stories Home]   Read on to Part V >>
Showdown at Club 42
IV Old Times
"Ciro! I—" Joey stammered.
Ciro Rosetti sauntered in without a care in the world. He looked good. He topped me by an inch or so, and had the extra weight to prove it, only some of it muscle. Most had likely come from too many home-cooked meals. He had a trusting kind of face with soft lines and no hard edges. The hardness came from within. Dark eyes and dark hair, going a little grey at his temples, peeked out from under his white fedora. A bright red feather peeked out of the black ribbon around it. It looked exotic and expensive. Ciro had
Read more »
Labels: short story

<< Go back to Part II   [Stories Home]   Read on to Part IV >>
Showdown at Club 42
III Card Sharks
Laura let the cards sail. She didn't bother to deal Danny in. Joey frowned momentarily at that, but then shrugged. Everyone knew that the game rode on my performance, not Danny's. Danny took a nervous drink at some whiskey, his hand jangling the ice in the glass. The stakes had made themselves known to him, but he didn't know
Read more »
Labels: short story

<< Go back to Part I   [Stories Home]   Read on to Part III >>
Showdown at Club 42
II High Stakes
I approached the gatekeeper again, but this time with my best insolent grin along with the preferred invitation. He gave it a once over, glared at me hard and with the puzzled expression of trying to do an incredibly difficult arithmetic problem in his head, which meant two plus two for him. He growled once, evidently coming up with three for the answer, and let me pass.
The table was in a recessed alcove, and pretty well shielded from prying eyes and the sounds of the club. Five people sat at the table, including the dealer, a wiry man with a visor. A man stood near the dealer. He had an average face with brown hair and brown eyes. He had a neat suit, grey hat, and a red carnation
Read more »
Labels: short story

Showdown at Club 42: Part I

[Stories Home]   Read on to Part II >>
Showdown at Club 42
I Getting a Seat at the Table
It was a funny thing about speakeasies. Everyone dressed up, men and women alike, but there was more in the way of under attire than was appropriate for decent company. More than a few of the gals toted roscoes in their purses or tucked into a garter, though I preferred when the lump was a flask. Men were the same, with the gat tucked into the waistband or a holster under the coat. I could spot the people who
Read more »
Labels: short story

"I thought that you had agreed to leave me alone." I closed the door to my office, and scowled at the little man sitting in front of my desk. His legs dangled far from the floor, and he had pulled the coffee table from in front of the couch and spread various tools and implements on it. He hammered away at a shoe.
"Don't be like that, Matt'ew. An' I never agreed to an'thing like that." 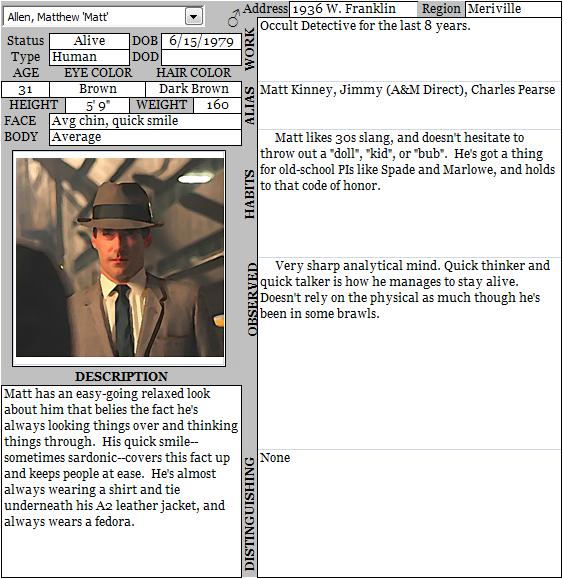 F3 Choosing out the Mark

They always says to me to go after the weak guy. The nervous guy who doesn't belong. You know the type, the real fish out of water. And there he is sittin' off by his lonesome. It's clear he don't really belong. He's sittin' straight, dressed nice, glasses. Looks like a real poindexter. Chances are I could lift him nice and easy, probably get a good bit, too, for my trouble.

The slow, steady hiss of the respirator made for percussion to accompany the steady beeps of the heat monitor. I continued to look at his face, hoping for something beyond the rise and fall of his chest. He lay there with tubes and wires sticking out of him, so reminiscent of the process used to create Frankenstein's monster. It was atrocious, an abomination to dignity to keep him trapped thus.