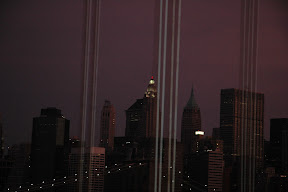 Never understood why it was the naked city. She's never naked. She's clothed in secrets, darkness, and decorated with lights that cast long shadows over her flaws.

In order to get myself on a more regular posting schedule, I'm going to try some regular features by stealing and modifying one I saw on the Deadline Dames known as the Readers on Deadline.

I know, it's almost August, and I'm just now putting up June's charts. Well, it's been down on my priorities, and the blog has had some of the promised changes made to it. There will be some, which is my current excuse for why the charts for June are late. 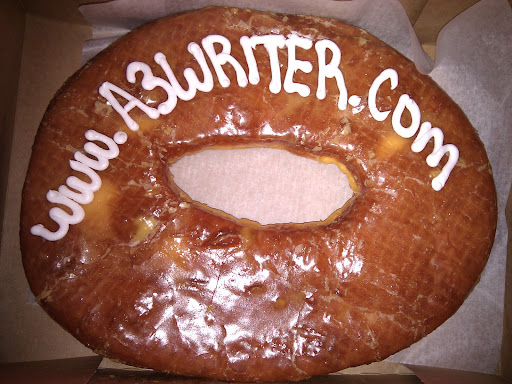 Introducing the Official A3writer Donut, courtesy of Round Rock Donuts. Yes, it is that big, and no trip to Central Texas should ever be complete without one.
Labels: Travel

A Drink with an Old Friend

Well, I'm on my second road trip, also back to Texas as I have free room for the duration. A major determining factor in the whole thing. Plus I got to see White Sands, finall. I'm had at work making myself into a social networking butterfly, gradually emerging from my larval coccoon. Writer nerds aren't exactly known for their innate ability at making smalltalk. I should talk to Commander Hutchinson (ST:TNG reference, anyone?).
In other news, I have completed the first draft of The Missing Succubus. This one ended up being a little longer than I wanted, so I'm going to be very aggressive in trimming it down.
I'm not going to start book 5 of Matt Allen just yet. I probably could, but I need to redirect my energies for a little while. I had the inspiration for something cool, now I just need to do it.
I know I'm behind on my word count for June, but it will be coming soon. I'll also be working out a new way for me to blog, one that means more frequent updates, and in a more web-friendly format (translation: shorter). So, stay tuned, true believers.

On this day, 234 years ago, it was hot in the city of Philadelphia, a blistering, humid day like those before it. The men of the Continental Congress signed a document, a document that had gone through many revisions, a document quite unlike any other in the history of mankind. For the first time in history, men came together to declare with one voice that they had rights, and that they would fight for those rights. They made a civilized declaration of war against a tyrant on behalf of the people they represented. They declared that they would become a nation unto themselves, that they would govern in a way that should be done, with all having a voice.
Those are the things we think about them declaring, but they did more than that. They declared themselves traitors to the king. They declared themselves enemies to one of the most powerful nations on earth. They declared not only their lives forfeit if captured, but that of their families. They declared their fortunes for a cause that might fail, and even if successful, leave them penniless. They declared the death of thousands of ordinary men and boys in their struggle. They declared and end to ties, friends, family, and professional, back in England.
They declared all of these things, and they paid the price. Their families were hunted. Their friends were hunted. Their fortunes confiscated or spent on the war. They died as traitors, as soldiers, as paupers, as men alone.
They knew all these things when they made this declaration, understood full well the consequences for themselves and the ones they cared about, and they signed, anyways, not knowing if they would succeed in creating the nation they dreamed.
So on this day, we enjoy the grill, the fireworks, and the time away from work, but remember the immense sacrifices that went into this day. Treat the day as more than a day off or an excuse to eat, remember the lives that went into making a nation. Remember that the flag is more than just stars and stripes. Remember that the Declaration of Independence is more than just words on the page.