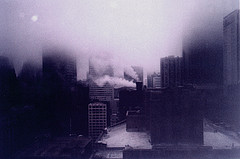 There was something about the fog. The way it hid, but still gave off light made for one of those paradoxes, and there's nothing quite like something that just can't be to bring people out. The weird ones, anyway. It was like a full moon in a month with an R in it. They came out and did their thing in the fog when the light of day revealed too much of them, and the night was too scary.

Now the bank was right in the middle, floating above the streets, like it was afraid to touch down. And I knew why. Somewhere, down there, something had scared off the fog. One of the weirdos had gone too far. The fog reflected the flash of red and blue lights from a squad car somewhere down below.
I blew out a streamer, adding to the fog as grey cloud captured the smoke. I tamped out the cigarette on the brick sill before flicking it down below. It was time to go to work.