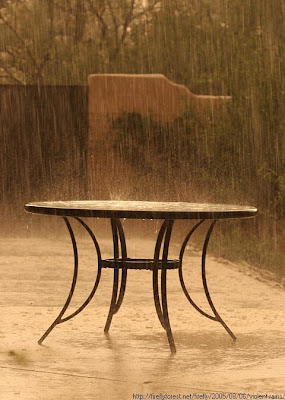 The cafe nearly closed for the day. Its patrons had long since deserted the all outdoor seating, except me. Usually, the rain in this city came down gently, but steadily. Now, though, I watched drops come down hard enough to bounce off the glass top table in front of me.

The couple that had stared at one another with longing, lovers' eyes had left almost as quickly as the storm had begun, the smolder in their stare neatly quenched by the rain. All around other patrons did the same as the big umbrellas were caught up in a gust fierce enough to topple a couple of the tables. The clerks had no choice but to lower and remove the umbrellas or watch them pull off a Mary Poppins impression.
With no cover, no one had stayed, though the occasional brave soul would rush into the cafe under cover of soaked newspaper in a mad dash from their car, only to repeat the run with a cup of coffee on the way out.
I continued to sit in the rain, leather jacket zipped up, and the brim of my hat dripping water down in front of me. I took a sip of my own coffee, the insulated foam warding away water and chill. It was good coffee. I sat there enjoying rain's show and song.