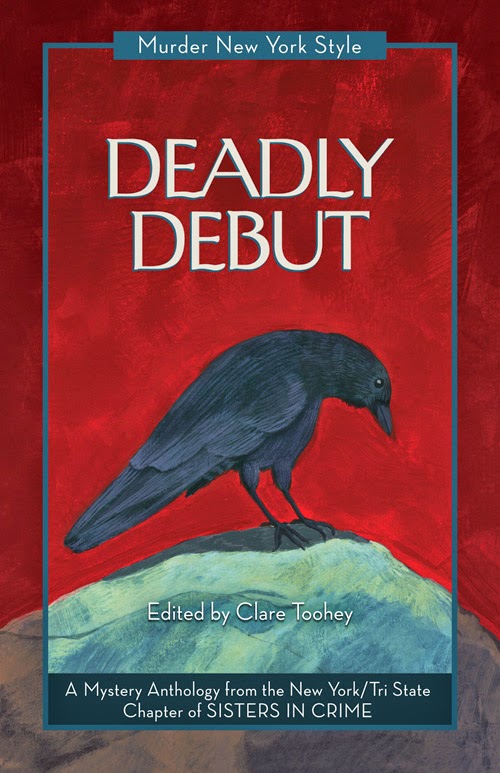 It’s not my usual thing on my blog, but I had the opportunity to review a mystery anthology, and I jumped at it, and I’m glad I did.  Deadly Debut is a mystery anthology put out by the New York/Tri State Chapter of Sisters in Crime with all of the stories taking place in that area.

The real strength of this anthology lies in its eclectic nature. There are stories for lovers of every kind of mystery from amateur sleuth to professional to the bystander who is trying to understand the reasons for a dead body in the closet and the beat cop investigating a shakedown.
I immersed myself in these stories so much they took my mind off the pain and discomfort of a root canal (Seriously! Any break in the drilling and I took to reading these stories). I won’t go over all the stories, but here are some (spoiler-free) thoughts about some of my favorites.
“Death Will Clean Your Closet” is a cautionary tale about partying to the point of memory loss. Explaining the dead body in the closet (which subsequently disappears) is difficult when you can’t remember the night before. This is a fun story with shades of the movie The Hangover but with more realistic overtones and concerns.
“Murder in the Aladdin’s Cave.” First, full confession, I am crazy for Turkish and Middle Eastern cuisine. Throw in live music and belly dancing and I’m a truly happy camper. So when I began to read a story in a restaurant with belly dancing, I got a little giddy (FYI, I was wrong about a kebab skewer as the murder weapon). Best of all, I could tell how authentic the experience was. The writer had either really done her research or had done some belly dancing herself to capture the full flavor of the experience. She also highlights what crazy places restaurants can be with their constant bustle, where people barely know what’s going on and can only keep track of their current task, so it’s quite understandable that no one was truly able to know what happened when one of the dancers winds up dead.
“The Lie.” Ah, childhood sins. It’s the little ones, you know, breaking curfew, sneaking out while grounded, going where you’re not supposed to be, and even the little white lie to an adult to keep yourself out of trouble. In a sitcom the little sin would turn out to be something funny and work as a great teaching moment before everyone goes out for ice cream. But this is a mystery story. There are real—long term—consequences to even the childhood sins.
“NYPD Daughter” A beat cop and a shakedown. It might sound like the beginning of a joke, but it’s a recipe for a well-done story that deals with the ramifications of generational police legacy. I would certainly be scared witless at the thought of my daughter joining the police.
Deadly Debut is a great anthology with sharp prose, weighty characters, and a story for all flavors of mystery lovers. Start off with one of the easy-going fun stories or jump into the deep-end with brooding, deadly ramifications, and a hard-boiled world.