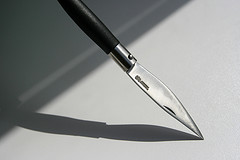 Calligraphy had always been his passion. The smell of old parchment, the way it crinkled and curled. The thick feel of vellum between fingertips, but most of all was the elegant curves of the perfect fountain pen. Sharp nibs that left a fine line on the page and a skritching sound that recalled ancient writers, how writing should be done. Each stroke of the pen deliberate, quick, and irrevocable. The stroke could not be recalled, undone. The mark left on the page was indelible. The pen did more than leave ink, but dug into the page etching it permanently with the author's words and passions.