Writers fear losing their work. It's a given. Having a word processor freeze up or a computer crash while in the middle of a hot writing streak is a knife to the heart. We simply can't recreate what was written before. However, all is not lost as one of the best tools for writers is under their very noses.
All word processors these days are equipped with an autosave or autorecover option (at least ones worth their salt). As I am a more mainstream word processor instead of the new options such as Scrivener or Liquid Story Binder, I'm stinking to only platforms I use: WordPerfect and Word.
By default, the time limit on an autosave or autorecover is listed at 10 minutes. However, ten minutes, on a really good day, could mean pages of a novel between saves. Fortunately, that ten minute time limit can be brought down to 1 minute (the absolute minimum as I've tried decimals and the program pitches a fit).
For you Word users out there---despite the awesome superiority of WordPerfect! (end soapbox)---finding the actual location of the autosave depends on which version of the program. In the more recent 2007 or 2010, it's buried in Word's options Office Button > Word Options (2007) or File tab > Word Options, and the screen looks something like this: 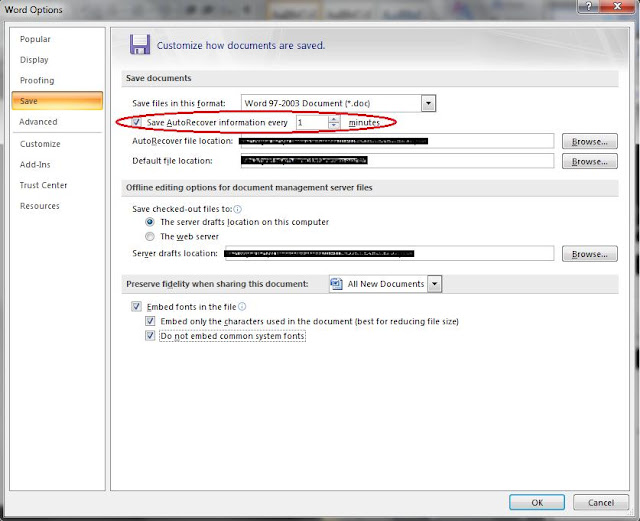 Simply change the time from the default 10 minutes to the much less scary 1 minute time. And that's it. All work is automatically saved every minute.
For the people who have older versions of Word the autosave is buried under Tools > Options.
For my WordPerfect peeps (Represent!) it's under Tools > Settings > Files, and basically is the same process.
Now, lastly, you'll notice in the picture that there are file locations which I've blanked out. These are important to keep in mind for next week's tip. We'll be doing something special with them.