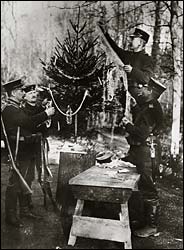 The bitterly cold night was calm. Down in the trench someone tried to get a small fire going in a rusted tin in an effort to keep frostbite at bay. The only good thing about the cold tonight was that the mud had frozen solid, and our boots no longer soaked. The threat of frostbitten toes replaced trench foot, but it was a welcome trade.

A few more curses sounded behind as they worked matches with numb fingers to try and catch the frozen tinder to flame. Saunders continued to peer out through the darkness as he was the man on watch. He saw nothing, heard nothing. All was quiet tonight. He hoped it would last. It was bad enough to even be out here the rest of the year, but on Christmas Eve he didn't want to fight. The talks of a cease fire had fallen through, and both sides had to be on guard against an attack tonight.
"We got it! We got it. Hand me some more fuel." Chauncey said as yellow and white light blossomed from the tinder.
Ericson supplied more tinder, which flared to life quickly. Using crude tongs Chauncey moved the fire down to the trench floor, and the two began to pile on more.
"Keep it coming. Hand me that branch." Chauncey pointed.
"Not that one. That's our tree." Ericson protested.
"Come on, what's more important, the tree or the fire."
"The tree." Ericson and Saunders said at the same time.
"Bollocks. I want to stay warm tonight."
I don't care if he freezes, he's not taking our tree! "Here," Saunders reached out and grabbed a couple of old posts used to string up wire.
"For God's sake, these have been sitting in the mud! It'll take forever for them to catch."
"What else have you got to do?" Saunders smiled.
Chauncey fell to mumbling, then, but he set to work carefully building his fire up.
Something, hard to say what, drifted over No Man's Land. Saunders snapped his attention back, and gripped his rifle. Looking at the firelight had ruined night vision, so he squeezed his eyes shut for a five count, looked, then repeated twice more until some semblance of night vision returned. There. The sound came again, louder this time, and a light radiated out of the opposing trench.
"What's that?" Ericson asked, and climbed up.
"It's . . . singing" Saunders replied.
"You're daft. Fritz is up to something," Ericson griped, and didn't join them.
"O Tannenbaum, O Tannenbaum . . ." the tune carried over stronger now, as if more voices joined in.
"They're singing carols. God, I miss that." Chauncey said.
Me too.
"Who's stopping you. We can show Fritz that the only proper words are English!" Ericson crowed.
"O Christmas Tree, O Christmas Tree . . ." Saunders began, and the others joined in. It wasn't a competition, though. The men just sang, rousing their buddies until all chorused the song. On the far side, they had gone quiet, pausing until the English troops had finished.
All was silent for a time, and then Ericson, all trace of bitterness gone, began singing "Silent night, holy night . . ." and the others joined in. They paused after the first verse, then heard back the same tune, the words in German.
After several songs, and trading wishes of a Merry Christmas, Saunders took the first step, of climbing out of the trench with a lantern held high, and a bottle of rum his family had sent him for Christmas. He walked out without his rifle, and tread carefully on the ground, seeing someone on the other side do the same. Behind him, Saunders heard Ericson and Chauncey cautiously follow him.
All was tense as they slowly made their way to one another, but finally Saunders and his German counterpart came forward and shook hands. "Merry Christmas," they said to one another.